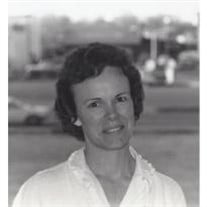 Sally Syble Grafton, the devoted and loving mother of six, and a long time resident of Anchorage , passed away quietly in the late evening of Friday, October 14, 2011, one week after her 83rd birthday. Memorial services will be held Saturday Nov. 12, 2011 at 4 P.M. in the Clark Funeral Home Chapel with Rev. Dr. Gary Abbott officiating. Burial will be in Orange Hill Cemetery. Syble— as she liked to be called— was the youngest of eight children, whose only sister was the oldest, leaving her at the mercy of six older brothers who, though protective, liked to tease her by hiding her Christmas candy, or by chasing her up a tree and shooting china berries at her with blow-tubes, or so the story goes. She left her loving brothers and home town of Hawkinsville , Georgia at the early age of 17 after quietly marrying her sweetheart and life-long love Francis "Frank" R. Grafton (whom she met on a jaunt with relatives to Daytona Beach Florida ) on the eve of his deployment to Germany in 1945. Her husband's love of flying later saw the couple living in Orlando where he worked at the Eastern Airlines terminal until he re-entered the service as a young Air Force officer on the eave of the Korean conflict. Thus began Syble's long adventure in far-away homes and travels. Her first such home was in Tacoma , Washington , where son Charles was born in 1951. This was a lonely time for Syble, who, like so many others, missed her young husband taken away to the war. Late in 1953, she took her son trick-or-treating and he, choking on a candy, caused her in her polite nature to hose off a neighbor's porch in the dark while very largely pregnant: the next morning her second son, Ronald, was born. Ronald was named after her brother who was thought lost after his capture by the enemy, but later was freed. Then, after, a short time living in Hawkinsville with her two sons saw Syble moving to Japan a mere 10 years after the end of WW2. At that time Japan was still an exotically different place, and the couple reveled in the sights to be seen as well as the fine works of art and finely crafted household objects to be had there. Her sons Curtis and James were born there in 1956 and 1957, and in their teens had to be sworn in as US citizens. With Korea now a memory, Frank was put in the reserves and the family returned to his home town of Ocoee , Florida for the next four years. They lived in their first house, a lakefront property where her boys learned to swim and "go play outside, now!" as she used to say. Lots of dirt meant lots of baths for her boys in those days. The early sixties saw a return to the service and a short 9-month stop in Minnesota just long enough for son Clifford to be added to her noisy little army of boys. Still no girl for Syble. Next stop was Travis AFB in California . Here in 1963, she finally had her girl, Hilda. She is said to have exclaimed at Hilda's birth: "Ooh, I made a Girl !" This was a fine station for the family which blended into a move back to Florida in 1967 as her husband left for Vietnam . A few years later Frank left the service to join Japan Airlines and the family moved to Yokohama , Japan in 1969. Then Syble's world travels really got going. She was able to travel worldwide to the far east, Australia , and Europe . Finally, in 1972 the family moved to Anchorage , a fueling stop to Europe where many airline pilots live. But Syble's travels continued with a two year stop in SriLanka. Anchorage remained Syble's home and the family rendezvous for nearly forty years, and in this time she became a nurse and worked many years at Providence Hospital. Now, so many years and times later, she will finally return to Hawkinsville. Syble is survived by all six of her children, nine grandchildren, two great-grandchildren, and many fine friends like Vanda, of her nursing days. It can be said of her that she achieved that rare personality of older age: where she could say anything to anybody, and it would always come out as charming. Syble's mother, Mrs Jim Hill,would say with a wry grin: "I'm fat n' sassy!". True to her mother before her, that happy, easy-going heart was the center of this lovable lady. Hopefully, some of it is carried on in us. Clark Funeral Home has charge of arrangements.

Sally Syble Grafton, the devoted and loving mother of six, and a long time resident of Anchorage , passed away quietly in the late evening of Friday, October 14, 2011, one week after her 83rd birthday. Memorial services will be held Saturday... View Obituary & Service Information

The family of Sally Syble Hill Grafton created this Life Tributes page to make it easy to share your memories.

Sally Syble Grafton, the devoted and loving mother of
six, and...