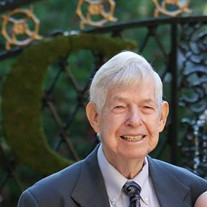 John Henry Crump, Jr., age 87, of Hawkinsville, Georgia died on November 18, 2018 at Navicent Health in Macon, Georgia. Graveside services for Mr. Crump will be held at 12p.m. on Wednesday, November 21, 2018 at Andersonville National Cemetery in Andersonville, Georgia with Rev. Blake Westbrook officiating. Visitation will be held on Tuesday, November 20, 2018 at Clark Funeral Home from 6p.m. to 8p.m. Mr. Crump was born in Hahira, Georgia on December 12, 1930 to the late John Henry Crump, Sr. and Beulah Crump. He was a member of the Rose Hill Church of Christ in Columbus, Georgia John served in the United States Army and completed two tours of duty during the Korean War. He was a retired ice plant owner and manager for over 50 years having stores in Valdosta and Albany as well as Hickory, North Carolina. Mr. Crump was a member of the VFW, American Legion and served as an American Red Cross Volunteer. While serving as a volunteer with the American Red Cross he provided relief during 33 disasters including September 11, 2001 and was selected as volunteer of the year with the Red Cross. Those left to forever cherish his memory include his wife of 66 years, Elizabeth Everette Crump of Hawkinsville, Georgia; sons, John Calvin (Marsha) Crump of Columbus, Georgia, Ronnie (Carol) Crump of Hawkinsville, Georgia and Terry Clay (Karla) Crump of Dacula, Georgia; daughters, Twyla (Rob) Crump McCree of Huntington, Tennessee. Mr. Crump is also survived by 9 grandchildren and 9 great-grandchildren. Please view or sign the online memorial at www.clarkfuneralhawkinsville.com Clark Funeral Home of Hawkinsville, Georgia in charge of arrangements.

The family of Mr. John Henry Crump created this Life Tributes page to make it easy to share your memories.