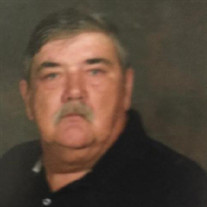 James 'Michael' Shelton, 62, died Monday, April 27, 2020 in Cordele, GA. He was a father to Michelle Treadwell and husband to Julie Shelton. He leaves his sister, Carol Carrier, brother Joey Wasserman (wife Cheryl Wasserman), and brother Jerry Boddy; Carol's sons Kraig and Kevin Carrier (wife Jill Carrier and their children, Morgan, R.J., and Trent). He was preceded in death by his father Reuben James Shelton, mother Alice Shelton (Heath), and sister Crystal Irene Shelton. Michael grew up in Orange County, FL where he worked in the construction industry as an adult. Once retired, Michael moved to Tippettville, GA to care for his adopted brother, Jerry Boddy. Michael was an avid Nascar fan (who never missed a televised race), a model car collector, and loved a classic Old Western film. He had a great sense of humor and could re-tell funny stories better than anyone in the room. Michael was proud to step into his father's shoes as a father figure to his brother Jerry, who he took regularly to the races at Cochran Motor Speedway. Michael took pride in his involvement at Tippettville Baptist Church where he served on multiple committees and loved putting together a great "eatin' meetin'". He loved his family, and many friends throughout the Tippettville area. He will be missed. Funeral services will be held on Monday, May 4, 2020 for select family members and friends officiated by Rev. Charles Cobb. A 'celebration of life' service will be held at a later date due to current social distancing guidelines. In lieu of flowers, donations to Tippetville Baptist Church in Michael's memory will be greatly appreciated; c/o Sue Watson, 99 Watson Road, Vienna, Georgia 31092 Clark Funeral Home in charge of arrangements. www.clarkfuneralhawkinsville.com

The family of Mr. James "Michael" Shelton created this Life Tributes page to make it easy to share your memories.