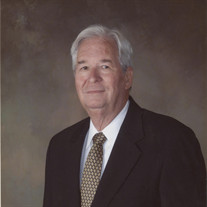 John Henry Anderson, Jr. passed away January 10, 2019 after a brief illness. A lifelong native of Hawkinsville , and a graduate of Hawkinsville High School and the University of Georgia. Mr. Anderson proudly served in the United States Navy. He married Dora Franklin in 1968 and began a life-long career in public service. After a 7 year tenure as a Georgia State Representative, John Henry served as Pulaski County’s sole county commissioner for 24 years. During that time, he also served as the Chairman of the Democratic Party of Georgia (1985-1990) and as a member of the Board of Regents of the University System of Georgia (1983-1996). A member of the board at SunMark Bank for numerous years, he was deemed Member Emeritus in 2017. John Henry is preceded in death by his parents, John Henry Anderson, Sr. and Belle Woods Anderson and three brothers Piney Anderson, Charles Anderson and Tony Anderson. He is survived by his loving wife of 50 years, Dora Franklin Anderson and numerous nieces and nephews. He was a man who dedicated his life to the service of others. He was passionate about the betterment of both the community and state in which he lived as demonstrated with nearly 40 years of public service. Many lives were touched in a positive way by a man always willing to lend his assistance. His other true passion in life was his wife, with whom in his later years he visited the sick and elderly throughout their community. A visitation will be held Sunday, January 13, 2019 from 1:00 pm to 2:45 pm at Clark Funeral Home Chapel. The service will begin at 3pm. Interment will be at Orange Hill Cemetery. Pallbearers are Travis McLendon, Edward McLendon, George Lester, Tarvos Simmons, Darrell Brown and Clint Brown. Honorary pallbearers are Ernest Mashburn, Ronnie Fleeman, Bub Way, Sambo Way, Johnson Hall, Bobby Johnson, Dr. Steve Clements and Dr. Gene Jackson. The Reverend Dr. Gary Abbott and Dr. Kelly Pritchett will officiate. Clark Funeral Home in charge of arrangements.

John Henry Anderson, Jr. passed away January 10, 2019 after a brief illness. A lifelong native of Hawkinsville , and a graduate of Hawkinsville High School and the University of Georgia. Mr. Anderson proudly served in the United States Navy.... View Obituary & Service Information

The family of Mr. John Henry Anderson Jr. created this Life Tributes page to make it easy to share your memories.