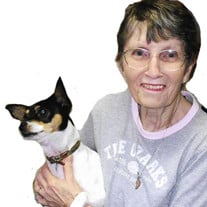 Ann Owen Miller, age 90, became a citizen of heaven after dying peacefully at her home in Acworth, Georgia on December 6, 2021, which was her husband’s birthday. She was born in Hawkinsville, Georgia on November 9, 1931 to her parents James Edmon and Ida Pauline Owen during one of the worst droughts of the Depression. She was welcomed to the family by big brother James Edmon, Junior. Ann’s father was a Hawkinsville postman for many years, delivering mail on a twice daily basis! Ann met and married the love of her life, Joe Miller, at the Warner Robins Air Force Base where she worked as a typist. Shortly after the wedding, which was performed at her childhood home, Ann and Joe moved to Macon, Georgia for about a year, then to Dalton, Georgia, where Joe began work in the burgeoning carpet industry. While living in Dalton, they welcomed three sons to the family: Philip, Steve, and Richard. God and family were the guiding lights of her life. She often taught Sunday School and attended Women’s Bible Studies at the First Baptist Church and the Fellowship Bible Church in Dalton. She enjoyed golf, working in the yard and playing tennis. For Ann there was nothing more fun than breakfast at Cracker Barrel with family and friends. Ann is survived by her sons, Philip (Marilyn) of Gainesville, TX, Steve (Cherie) of Acworth, and Richard (Angela), of Missouri City, TX. Twelve grandchildren were often treated to her special peanut butter cookies. Grandchildren are: Philip (Allison) of Lewisville, TX, James (Jordan) of Harleton, TX, Robbie Ann (Jerrod), of Dallas, TX, Andrew, David and Paul of Acworth, Benjamin of Van Nuys, CA, Steve Ewings of Emerson, GA, Joshua Ewings of Cartersville, GA, Mark Ewings (Breaundreia) of Savannah, and Danielle and Melanie of Missouri City, TX. Ann was also blessed with four great-grandchildren: Jacob, Katelyn, Aviana, and Levon. She was preceded in death after 54 years of marriage by her sweet husband Joe, her mother Pauline, her father Ed, and her brother, Ed Junior. Ann was a loving caregiver of more than 15 years for her mother who also died peacefully in her sleep at home at age 110. A graveside viewing will be held on Saturday, December 18, 2021 from 1pm to 1:30 pm at Browndale Cemetery and the service will begin immediately following at 1:30pm. Clark Funeral Home will oversee arrangements. In lieu of flowers the family asks that memorials be made to Providence Ministries, Dalton, GA or to support Paul and Nancy Griffin, missionaries with Cru in Orlando, FL. 1 Thessalonians 4:13-14: 13 Brothers and sisters, we do not want you to be uninformed about those who sleep in death, so that you do not grieve like the rest of mankind, who have no hope. For we believe that Jesus died and rose again, and so we believe that God will bring with Jesus those who have fallen asleep in him. The family requests that casual attire be worn if attending the services. Please view or sign the online memorial at www.clarkfuneralhawkinsville.com

Ann Owen Miller, age 90, became a citizen of heaven after dying peacefully at her home in Acworth, Georgia on December 6, 2021, which was her husband&#8217;s birthday. She was born in Hawkinsville, Georgia on November 9, 1931 to her parents... View Obituary & Service Information

The family of Mrs. Ann Owen Miller created this Life Tributes page to make it easy to share your memories.