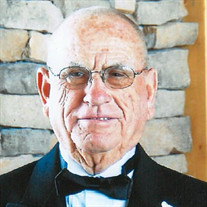 Mr. Vernon Henry Richardson, age 84, of Hawkinsville, Ga. passed away on April 14, 2021 at his residence. Funeral services will be held at Pope City Baptist Church in Rochelle at 2:00 p.m. on Saturday, April 17, 2021 with Rev. Danny Allen officiating. A visitation will held on Friday, April 16, 2021 from 6:00 p.m. to 8:00 p.m. at Clark Funeral Home. V. H. was born on May 19, 1936 in Pulaski County to the late Vermon and Elizabeth Richardson. He joined the Navy in 1954 and proudly served his country stationed in Jacksonville, FL. and China Lake, CA. Upon his discharge from the service, he returned to his hometown of Hawkinsville where he worked as a master mechanic and raised his family. V. H. had a love for mechanics and bluegrass music, which he introduced to his family and many friends. He played bluegrass music with his son, brother and several friends for many years, playing in churches around the area and hosting several benefit BBQ and sings for the people in need from his community. The early years before his music, he and his brother, Willie, built and ran a drag race car accomplishing many victories through several years. His music became the center after his son, Mutt, got old enough and good enough to play for the public; as time went on he turned back to racing when Mutt decided to build a round track race car. Daddy (V.H.) along with Mutt and the late Troy Talley were the team to beat for almost a decade with a major championship win in AL. V. H. instilled that love of working, mechanics, racing, picking and growing things in his grandsons as they came along to follow in his footsteps. His legacy will live on through the lives of his family. V. H. was preceded in death by his parents; brother, Larry Richardson; son, Vernon (Mutt) Richardson; daughter, Desiree Renee’ Richardson; father-in-law, Wilbur Staples and brother-in-law, Daniel S. Staples. Left to cherish his memory is wife, Susan S. Richardson of Hawkinsville, Ga.; daughters, Cissy Thomas of Hawkinsville, Ga. and Molly (Eddie) Nelson of Unadilla; son, Cody Adkins of Hawkinsville, Ga.; daughter-in-law, Wanda Richardson of Cochran; grandchildren, Mitchell Richardson, Larry Richardson, Kendall (Kendall) Brown, April (Alex) Holmes, Cliff Brown, Leona (Christopher) Cape, Spencer (Julie) Nelson, Makayla Nelson, Henry Richardson, Abbi (Colin) Lange, Kale Adkins and Kiley Adkins; 12 great-grandchildren; mother-in-law, Peggy Staples; sister, Lavern Kilgore of Hawkinsville, Ga.; brothers, Curtis (Vivian) Richardson of Blairsville and Willie Richardson of Cochran; a double first cousin who he thought of as a brother, Lamar (Jane) Richardson of Hawkinsville and a host of nieces, nephews and cousins. Clark Funeral Home of Hawkinsville, Ga. is in charge of the arrangements. Please sign the online register at www.clarkfuneralhawkinsville.com

The family of Vernon Henry (V.H.) Richardson created this Life Tributes page to make it easy to share your memories.