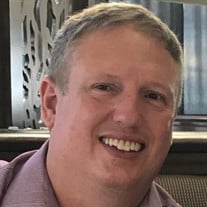 William Lee Anderson, Jr., of Hapeville, Ga. passed away unexpectedly on September 22, 2020 at his home. Lee was born in Warner Robins, Ga. on February 5, 1970. A graveside service will be held at Pineview Cemetery on Monday, September 28 at 2 o’clock with The Reverend Dr. Gary L. Abbott and Dr. Don McClung officiating. Lee attended Pulaski County schools and graduated from Hawkinsville High School in 1988. He was a devoted student and graduated with honors. After high school, Lee attended Middle Georgia College in Cochran and then transferred to Georgia Tech where he majored in Industrial Engineering. He received his Bachelors in March of 1993. Lee’s career took him to Mississippi and then back to Georgia. He was presently serving as a Product Quality Engineer for Anatomy Supply Partners in Atlanta. In his positions, Lee traveled all over the world, working in such foreign places as China, India, Mexico, Haiti and Honduras. In addition to his love for travel, Lee enjoyed decorating and landscaping. He renovated an older house in Hapeville in a regentrified neighborhood and created landscaping both in his own yard and in that of his parents in Hawkinsville. He had impeccable taste, loved to cook and entertain, and was a restaurant guru. In all ways he was gentle as well as a gentleman, had a kind and loving soul, and possessed a dry wit in unexpected places and situations. Lee was preceded in death by his maternal grandparents Charlotte Dennard Bridges and James Anderson Bridges, Sr., of Pineview and by his paternal grandparents Belle Woods Anderson and John Henry Anderson, Sr., of Hawkinsville. Lee’s beloved cousin April Anderson Goble also passed away just weeks before his death. Lee is survived by his loving parents Sandra Bridges Anderson and William Lee Anderson, Sr., of Hawkinsville. His sister Kylie Anderson Ray and her husband Andy Ray along with their daughter, nine-year-old Charlotte Lanier Ray, also survive him. Charlotte and Lee shared a unique relationship and bond. Other survivors include JoAnna and James Bridges of Valdosta, Ga.; Marcia and Gene Hardy of Hawkinsville; and cousins Al and Kay Anderson, John Anderson, Dora Anderson Hood and her husband Dave, Sarah Anderson Johnson, Tracee Anderson Sealy and her husband Ron, Jason and Tanya Bridges and Justin Bridges. Numerous other cousins and friends join the list of survivors. After the service, the family will receive family and friends at the home of Lee’s parents at 811 Columbus Rd., Hawkinsville, Ga. In lieu of flowers, contributions can be made to First Baptist Church of Hawkinsville. Clark Funeral Home of Hawkinsville, Ga. is in charge of the arrangements. Please sign the online register at www.clarkfuneralhawkinsville.com.

William Lee Anderson, Jr., of Hapeville, Ga. passed away unexpectedly on September 22, 2020 at his home. Lee was born in Warner Robins, Ga. on February 5, 1970. A graveside service will be held at Pineview Cemetery on Monday, September 28... View Obituary & Service Information

The family of Mr. William Lee Anderson Jr. created this Life Tributes page to make it easy to share your memories.