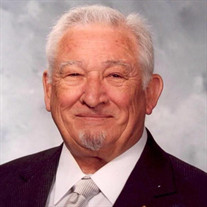 W. Mansfield Jennings, Jr., of Hawkinsville, Georgia, died peacefully at home on June 23, 2015, following an extended illness. A service celebrating his life will be held on June 25, 2015 at 1p.m. at the Hawkinsville First United Methodist Church with The Reverend Doctor Gary L. Abbott and The Reverend Reginald Gunn, former priests at St. Luke's Episcopal Church, and The Reverend Aaron Brewer, Deacon-in-Charge of St. Luke's Episcopal Church, officiating. Mansfield was a native of Hawkinsville, born there on June 1, 1934, to W. Mansfield Jennings, Sr., and Sarah Horne Jennings. He grew up in Hawkinsville and graduated from Hawkinsville High School. After high school graduation, he attended the Georgia Institute of Technology, where he earned a BS degree in industrial management. He later earned an MBA from Emory University and subsequently pursued further studies at Georgia State University and London School of Business. A proud veteran of the U.S. Navy, Mansfield served as an officer both on active duty and in the reserves. Following active duty in the Navy, he returned to Hawkinsville to work with his father at Hawkinsville Telephone Company. Mansfield purchased the company in 1980 and began the transformation from a small telephone company to the diversified telecommunications company of ComSouth. This feat, in turn, led to his involvement in other telecommunication ventures such as cellular and cable television. Today, his legacy provides state of the art telecommunications services to a broad swath of middle Georgia, including Hawkinsville, Cochran, Perry, Fort Valley, Unadilla, Pinehurst, and parts of Warner Robins. Active in advancing the telecommunications industry at both the state and national level, Mansfield served as President of Georgia Telephone Association and later as a director. He participated in several national associations, including The Organization for the Protection of Small Telecommunications Companies and US Telecom Association. Mansfield also was recognized for his accomplishments by the Georgia Institute of Technology when the School of Management inducted him into its prestigious Hall of Fame. Mansfield was also very involved in the banking industry with SunMark Community Bank and its growth in middle Georgia. He was Chairman of the Board for a number of years until his death. A number of civic organizations have also benefitted from Mansfield's leadership. He was past president of the Hawkinsville-Pulaski County Chamber of Commerce and also of the Hawkinsville Rotary Club. He was past District Governor of Rotary International. Mansfield served on a number of boards in the Middle Georgia area including the South Georgia Chamber of Commerce, Museum of Aviation, United Pulaski, Inc., and Taylor Regional Hospital, where he was chairman. He supported the University System of Georgia by serving as a member of the Board of Regents for ten years and was on the Board of Directors at the Medical College of Georgia Health, Inc. Mansfield was recognized for his community service by being selected Citizen of the Year two times. In recent years, Mansfield served on the Mercer University Board of Trustees with special support of the McDuffie Center for Strings, where he endowed the Genelle and Mansfield Jennings Chair, held by violinist Robert McDuffie. His support of both the finest in arts and his love of his hometown led to his gift of a grand piano to the Old Opera House where he enjoyed many concerts and wanted generations to come to appreciate great music and performances. A favorite pastime of Mansfield's was spending time with friends and family. He enjoyed skiing, sailing, and horticulture. He particularly loved classical music and delighted in the piano and violin. He loved traveling and experiencing new cultures and was an accomplished amateur photographer. Wing-shooting was also a passion that he eagerly anticipated each fall. Mansfield was a long-time member of St. Luke's Episcopal Church in Hawkinsville. He served the church as Senior Warden, a member of the Standing Committee of the Diocese of Georgia, and Chairman of the Campaign for Congregational Development. Mansfield is survived by the love of his life , Genelle B. Jennings. They were married for 58 years and have two children, W. Mansfield Jennings III and Meredith Jennings McDaniel, both of Hawkinsville. He has four grandchildren, Andrew Jennings McDaniel, Ellen Caitlin McDaniel, Sarah Jennings McDaniel, and Elizabeth Eileen McDaniel, all of Hawkinsville. He is survived by a brother, Jerome Edwin Jennings, MD, and wife Beverly of Winston-Salem, NC, and a sister, Saralyn Jennings Bowman and husband Richard of La Follette, TN. In lieu of flowers, the family requests that memorials be made to St. Luke's Episcopal Church, P. O. Box 373, Hawkinsville, GA 31036. Please view or sign the online memorial at www.clarkfuneralhawkinsville.com Clark Funeral Home of Hawkinsville, Georgia in charge of arrangements.

W. Mansfield Jennings, Jr., of Hawkinsville, Georgia, died peacefully at home on June 23, 2015, following an extended illness. A service celebrating his life will be held on June 25, 2015 at 1p.m. at the Hawkinsville First United Methodist Church... View Obituary & Service Information

The family of W. Mansfield Jennings Jr. created this Life Tributes page to make it easy to share your memories.