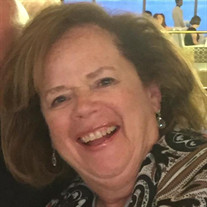 Pamela Curth Griffin left this life early December 5th peacefully at home with her family. She was born March 5th, 1949 in Atlanta, Georgia, to the late Henry A. Curth and Miriam Harton Curth. She graduated from the University of Georgia where she served as president of the Alpha Delta Pi sorority. Married for 45 years to Benjy Griffin, she was also the daughter-in-law of Ben and Mandy Griffin whom she loved dearly. Pam began and ended her 40+year teaching career as a speech-language pathologist. During her teaching years she also served as special education director for Pulaski County Schools, working tirelessly to help those children and families who needed assistance and advocacy. In her later career, Pam implemented one of Georgia's first lottery-funded pre-K programs here in Pulaski County and served as its administrator for many years. L.I.T.T.L.E. Children Growing has served thousands of four-year-olds in our county and is one of Pam’s proudest accomplishments. Pam also spearheaded the effort to successfully restore the old High School building, which resulted in its addition to the National Historic Registry, bringing another wonderful resource to our small town. She retired from Pulaski County Schools in 2003 then returned part-time doing what she loved most, serving children with speech therapy needs. She always said she came from a long line of “mother-lovers.” She adored her grandmother Nana, lovingly cared for her mother Mimi, and was a devoted mother to her children Amanda and David. Splitting her time between Atlanta, Lake Blackshear and Hawkinsville, Pam enjoyed shopping at T.J. Maxx with her daughter, hosting her friends for weekend getaways, traveling with her husband, and spending time with her grandsons. Pammy — as she was affectionately known within the family circle — is survived by her husband Ben Henry Griffin, her daughter Amanda, son David, daughter-in-law Maggie, grandsons Ben, Henry and soon-to-be Samuel, brother Chris and sister Noel. Honorary pallbearers are grandson Ben Rigg and nieces and nephews James Carter, Robert Griffin, Kathryn Stempler, Fain Griffin, Aiden Griffin, Lange Kaupinen, Wesley Kaupinen, Pamela Kaupinen, Kimberly Curth, Chase Curth and Jeff Mundy. Visitation will be Wednesday evening, December 7th at the Griffin Residence at 51 Rawls Street and a memorial service will be held Thursday, December 8th at 2 pm at First United Methodist Church in Hawkinsville, Georgia. In lieu of flowers, contributions can be made to First United Methodist Church of Hawkinsville or St. Jude Children’s Research Hospital. Clark Funeral Home of Hawkinsville, GA in charge of arrangements.

Pamela Curth Griffin left this life early December 5th peacefully at home with her family. She was born March 5th, 1949 in Atlanta, Georgia, to the late Henry A. Curth and Miriam Harton Curth. She graduated from the University of Georgia... View Obituary & Service Information

The family of Pamela Curth Griffin created this Life Tributes page to make it easy to share your memories.