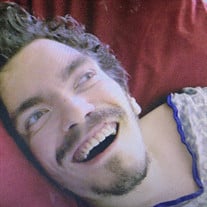 Joshua (Josh) Howard Keller, beloved son of Mark and Patricia (Pat) Landreth Keller of Hawkinsville, went to his rest on Wednesday, November 24, the day after his 39th birthday. Born three months prematurely, Josh lost his vision in infancy and later suffered damaging seizures that led to a life of profound disability. As he grew up, Josh’s home away from home was the hospitals of Middle Georgia, especially Taylor Regional. He recognized the voices of doctors and nurses and staff and greeted them with smiles as the caregivers and friends they had become. His memory was remarkable. He remembered the footsteps of friends after months of absence, favorite songs he hadn’t heard since infancy, and he delighted in tapes of his own voice from before he lost his language. One of his favorite pastimes was “playing” his keyboard, raking the keys to make his own special brand of “music.” But perhaps his favorite music was the sound of an ambulance, van, or king-cab pickup truck pulling up to the door: Josh would rather go for a ride than anything—even a ride to dialysis. In his brief time on earth, Josh showed those who knew him a glimpse into how to live the best life: with bravery, patience, endurance, and grace through terrible pain; with love and friendship to every extended hand; and with acceptance of his place in a world most would consider narrow and stifling. But Josh made his own happiness in his small world. He brought to those who entered it inspiration and the knowledge that every life, no matter how difficult, can be lived with joy. Joshua is survived by his parents, Mark and Pat Keller; a sister, Debra Duffield (Don) of Auburn, Alabama; uncles Johnny Landreth(Tina) of Lanett, Alabama, and Phillip Landreth (Dee) of Standing Rock, Alabama; nieces Kathryn Duffield of Auburn, Alabama, and Devon Owens of Valley, Alabama; special cousins Mary Keller Taylor of Jackson, Mississippi, Barbara Ponder Kitchens (Bobby) of Ridgeland, Mississippi, and Lydia Moncure of Mission, Texas; his best friend since childhood, Hayes Gilliam of Atlanta, Georgia, and his friend Debbie Garner of Hawkinsville, also dear to his heart; to Ben Cravey and his staff at Batts Drugs, Hawkinsville; and the many, many kind, loving, and incredibly generous friends who have given Josh their time and affection. Josh was preceded in death by his brother, William E. Owens, III (Sonya) of Southside, Alabama, and his sister, Kathryn M. Owens of Lanett, Alabama. The family is especially thankful to Barbara Peavy of Pineview, Georgia, Josh’s beloved and loyal caregiver for many years-- his adopted grandmother-- and her family, who have become their family. The family will also be forever grateful to Dr. Reuben Roberts, who guided and protected Josh through his many journeys through the Valley of Death until this final one, when God chose to take Josh home. Dr. Roberts’ many home visits, day and night, his close attention and availability during difficult-to- diagnose conditions, his swift actions in crises, and especially, his prayers, kept Josh in good health much longer than he was expected to survive. And thanks to God, for loaning this wonderful, innocent, uplifting young man to this family and community. Clark Funeral Home of Hawkinsville, Ga. is in charge of the arrangements. Please sign the online register at www.clarkfuneralhawkinsville.com

The family of Joshua Howard Keller created this Life Tributes page to make it easy to share your memories.