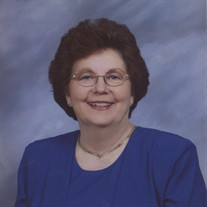 Geraldine Ruth Durrence Kirkland, 72, went to be with her Lord and Savior on November 4, 2015 at her residence, surrounded by her loving family. Funeral services will be held at Broad Street Baptist Church at 11a.m. on Saturday, November 7, 2015 with Dr. Kelly Pritchett, Rev. Jeff Waters and Mr. Bryan O’Neal officiating. Visitation will be held from 6p.m to 8p.m. on Friday, November 6, 2015 at Clark Funeral Home. Interment will be held at Pulaski-Bleckley Memorial Gardens following the funeral service. Mrs. Kirkland was born in Tattnall County, GA, the daughter of the late Horace and Pearl Durrence. She graduated from Reidsville High School in 1961 as class Vice-President. She attended Georgia Southern University and then graduated from Milady College of Beauty Culture, opening her first business, Milady Beauty Shop in Glennville, GA, in 1963. Mrs. Kirkland and her family moved to Hawkinsville, GA in 1967 where she continued her career as a Master Cosmetologist for 52 years, operating Geraldine’s Beauty Salon up until her illness. She was a member of Broad Street Baptist Church and the Auditorium Sunday School class. Her greatest love was her family and cooking for them as well as tending to her flowers. Geraldine was preceded in death by her parents, Horace and Pearl Durrence, and her husband of 51 years, Jack Kirkland. Survivors include her son Michael Kirkland (Angie) of Cochran, her daughters, Marsha O’Neal (Bryan) of Madison, Michelle Hill (Todd) and Marie Davis (Matthew) of Hawkinsville. Brother, Gary Durrence (Brenda) of Claxton, 8 Grandchildren and 2 Great-Grandchildren as well as several nieces and nephews. Flowers are accepted but donations can be made to Broad Street Baptist Church. Pall Bearers are Jeff Kirkland, Kyle Kirkland, Connor O’Neal, Casey O’Neal, Dalton Hill, Brian Durrence, Andy Durrence and Charles Fiveash. Honorary Pall Bearers are the Reidsville High School Class of 1961 and the Broad St. Baptist Church Auditorium Sunday School class. Clark Funeral Home of Hawkinsville, Georgia in charge of arrangements.

Geraldine Ruth Durrence Kirkland, 72, went to be with her Lord and Savior on November 4, 2015 at her residence, surrounded by her loving family. Funeral services will be held at Broad Street Baptist Church at 11a.m. on Saturday, November 7,... View Obituary & Service Information

The family of Geraldine Ruth Durrence Kirkland created this Life Tributes page to make it easy to share your memories.

Geraldine Ruth Durrence Kirkland, 72, went to be with her Lord...