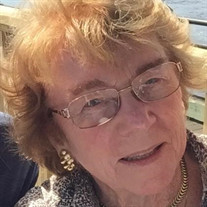 Mrs. Dixey Andrews Smith, widow of Dr. Richard Bembry Smith Jr. of Wilmington, NC, passed away peacefully on January 10,2022 at Lower Cape Fear Hospice Life Care Center. She was born on September 29,1932 in Long Beach, CA, the daughter of the late Rear Admiral Richard Stottko Andrews Sr and the late Fanny Russell Andrews. She is also preceded in death by her brother Richard Stottko Andrews Jr. and her niece Tahlia Andrews. Dixey graduated from Salem Academy in Winston Salem, NC and attended Mills College in Oakland, CA. She later moved to Hawkinsville, GA and married the love of her life, Dr. Richard B Smith Jr, who was a young naval officer on her father’s ship. Dixey and Dick Smith spent the next 60 years living a charmed life, raising their 4 children, traveling the world, entertaining friends, family, and even a former president of the United States. They were very involved with the Opera House Little Theater and will always be remembered for their portrayal of Ethel and Norman in “On Golden Pond”. Her reputation as a leader in her community, a devoted wife, mother, and grandmother, a brilliant gardener, a gifted entertainer, an accomplished culinarian, and a loyal friend to many people around the country is unprecedented and will be fondly remembered by all who knew her. Dixey was a member of the First Presbyterian Church in Wilmington, NC, the National Society of Colonial Dames/Burgwin Wright House, the Ministering Circle in Wilmington, NC, and a former member of the First Baptist Church of Hawkinsville, GA. She actively volunteered for many organizations during her life but most recently and fondly at the Lower Cape Fear Hospice Life Center. She is remembered there as someone who used her organizational skills and knack for hospitality to unselfishly manage the kitchen and the front desk as she graciously welcomed all the visitors and supported all the staff. Surviving are her four children, Lindsay Nell Smith of Wilmington, NC, Lani Smith Lawrence of Wilmington, NC, Cary Richard Smith and his wife Beth Coleman Smith of Hawkinsville, GA, and Scott Havens Smith of Hawkinsville, GA; her seven grandchildren, Brianna Lawrence Shait, L.A. Brown IV, Anne Brown Teller, Shannon Lawrence Ondecker, Scott Havens Lawrence, Russell Andrews Smith, and Amanda Bembry Smith; her sister Leilani Russell Andrews of Park City, UT; her nieces, Kathleen Jackson Martin, Laurie Jackson Gould, and Natalie Smith; her nephews, Walker Madison Jackson, Barton Alexander Andrews, Stratton Russell Andrews, James Lampkin Smith Jr, and Blake Jelks Smith; and her 7 great grandchildren. Memorials in Dixey’s honor may be made to the National Society of Colonial Dames/Burgwin Wright House at 224 Market Street, Wilmington NC 28401; the Ministering Circle, PO Box 3862, Wilmington, NC 28406; the First Presbyterian Church of Wilmington, NC; or the First Baptist Church of Hawkinsville, GA. Arrangements are in the care of Clark Funeral Home in Hawkinsville, GA. A graveside service will be held at Orange Hill Cemetery in Hawkinsville, GA on February 12, 2022 at 11:00am with The Very Reverend Dr. Gary L. Abbot, Sr. and Dr. Don McClung presiding

The family of Mrs. Dixey Andrews Smith created this Life Tributes page to make it easy to share your memories.